US fentanyl crisis could end opium era in Mexico: 'the only crop that paid’

The market price for opium has plummeted many in the US have swapped heroin for fentanyl, and could force Mexico’s impoverished farmers to abandon the narcotics trade

Every six months over the past two decades, Pedro García has planted a small crop of opium poppies alongside the maize and beans in his hillside field. The modest profits from the flowers’ sticky sap – known in Spanish as goma – paid for his children’s schooling, but now, García, 50, can no longer eke out a living.

“I knew it was illegal, but I took the risk – and thanks to la goma I raised my family,” said García as he regarded the red, pink and purple flowers. “But now it’s over: my children are grown, the goma era is finished.”

Mexico is the main source of heroin trafficked to the US, with some 75,000 acres of opium poppy production in 2017. 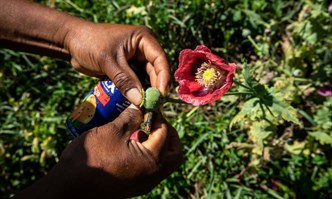 But drug use in the US has shifted: addicts have increasingly swapped heroin for fentanyl – an ultra-potent synthetic opioid often manufactured in China. As a result, the market price for opium in Mexico’s top poppy-growing state, Guerrero, has plummeted from $1,300 a kilo to $200.

"Is this yet another example of how prohibition leads to the use of far more dangerous versions of substances?" IDHDP

The fentanyl crisis has been responsible for tens of thousands of deaths in the US. But it also seems likely to bring about what half a century of the militarized war on drugs has been unable to achieve: forcing impoverished farmers in rural Mexico to abandon the narcotics trade.