The commissioner who led the state’s ice inquiry has accused the NSW government of missing a once-in-a-generation opportunity for drug reform and ignoring his recommendations 15 months after handing down a landmark report.

Professor Dan Howard SC said he was deeply disappointed with the government’s failure to respond to the 104 remaining recommendations after rejecting five almost outright, including pill testing and another supervised injecting centre. He said he wanted to know its reasoning for doing so. 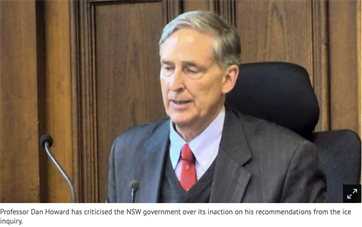 The veteran lawyer and teacher also said it was “beyond belief and unacceptable” the government hadn’t responded to a recommendation for more services for Aboriginal communities. He said he had felt personally haunted by some evidence of Indigenous families who remained sceptical the government would help.

“Having heard all the evidence I’ve heard, and made the recommendations that I’ve made, to be 15 months later wondering what on earth is the government planning to do, it makes me despairing of the political process,” Professor Howard said.

“I wonder how many of the politicians who are deciding what to do with this report have actually bothered to read it, frankly, because if they had they would understand the urgency of the measures that were recommended.”

A spokesperson for the government said it “maintains its strong position of being tough in the fight against illicit drugs” and would formally respond to the remaining recommendations by mid-year.

“Our focus on community safety will be the starting point of our response to the ice inquiry,” the spokesperson said. “We remain committed to keeping our community safe and ensuring police have the tools they need.”

Professor Howard delivered a four-volume report to the Berejiklian government on January 28 last year after months of harrowing evidence from health and judicial experts, as well as families and communities affected by crystal methamphetamine and other amphetamine-type stimulants.