Drugs ‘trilemma’: how to halt the deadly trade while still ensuring development and peace

The raid on a favela in the Jacarezinho area of the city represents one of the deadliest police operations in Rio in recent years.

The deaths of 25 people in a police raid on drug gangs in Rio de Janeiro have brought the “war on drugs” in developing countries into sharp focus once again. The raid on a favela in the Jacarezinho area of the city represents one of the deadliest police operations in Rio in recent years and has been condemned by the UN, which has called for an independent investigation. 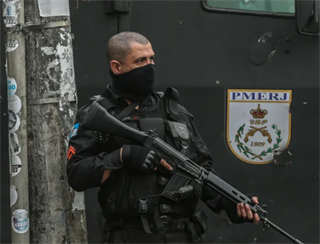 This violence is but one incident in a “war on drugs” being enacted in many parts of the world in which thousands have died and that has generated tremendous harms – not least to the health, livelihoods and human rights of poor communities living in the borderlands of drug-producing countries.

Given these harms, it has become increasingly mainstream to advocate for approaching drugs as a development issue, so that drug-related goals are more aligned with the development and peacebuilding objectives of the UN’s sustainable development goals, which provide “a shared blueprint for peace and prosperity for people and the planet”.

New research on drugs, conflict and development in the borderlands of Afghanistan, Colombia and Myanmar shines a spotlight on the tough trade-offs and the potential pitfalls of integrating the competing policy goals of eradicating the illegal drugs trade, securing peace and ensuring sustainable development – something that tends to get skirted over or hidden in policy debates.

Unprecedented overdose deaths among people in BC https://t.co/o8plZBMyHa

RT @INPUD: There has been a recent trend among international #HarmReduction donors perpetuating the harmful idea that drug use and drug dep…

RT @IDPCnet: It is time to disrupt the narrative that #DrugDecrim represents progress when laws are developed without input of people who u…

Why Japan Is so strict about drugs https://t.co/GvI8U0K4D1

Detox was the right choice for me—Even if I don’t plan on abstinence https://t.co/0GNBnPIpSJ

Kamala Harris tells Guatemalans to stay away - even as they flee drug wars America pays for https://t.co/qokyzfzh7j

RT @julianbuchanan: Unfortunately, Prohibition is a form of institutionalized oppression not interested in science or evidence.

RT @maiasz: all these nonsense claims about enabling & condoning drug use & lengthening addiction are refuted by decades of data. the fact…

RT @reachout_ke: #SupportDontPunish Despite the challenges they face, which include social isolation and the risk of overdose and early de…

RT @IDPCnet: This graph in @UNAIDS' most recent report is a call to ACTION. Governments must urgently *divest* from criminalisation & vio…

More >
Events Area
Smart on Drugs, Not War on Drugs – documentary screening and panel discussion
UK screening and discussion of Incarceration Nations Network’s (INN) powerful new documentary ‘Smart on Drugs, Not War on Drugs’.
A global advocacy campaign calling for drug policies based on health and human rights
We are incredibly grateful and in awe of campaigners worldwide, who came up with the most innovative and impactful ways to safely navigate COVID-19-related restrictions and stand in solidarity with populations most affected both by the epidemic and the “war on drugs”.
International Overdose Awareness Day.
International Overdose Awareness Day is an opportunity to remember loved ones lost to overdose. Our message is simple - the tragedy of overdose death is preventable and more must be done to save lives.