Myanmar returns to what sells: Heroin

Growing opium poppies is illegal in Myanmar, but farmers in this remote and desperately poor region say they have few viable options.

A decade ago, Myanmar seemed on course to wipe out the opium fields and heroin jungle labs along its eastern border, the notorious Golden Triangle. Today, valley after valley in these mist-shrouded mountains is covered with resplendent opium poppies, tended by farmers who perch on steep hillsides to harvest the plant’s sticky, intoxicating sap. 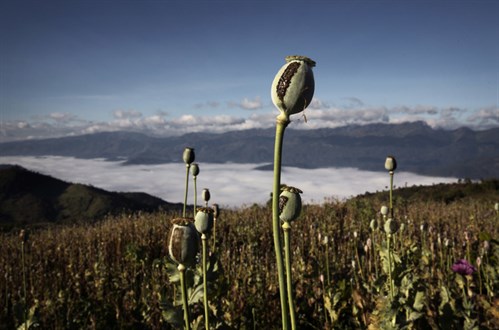 Poppy cultivation in Myanmar has nearly tripled since 2006, reaching close to 150,000 acres, according to surveys carried out by the United Nations. Yet even that steep rise fails to capture the full extent of Myanmar’s resurgence as a major player in the global heroin business. Over the last few years, an increasing number of farmers here have produced two opium crops a year, experts say; the second crop is not included in the United Nations surveys. Growing opium poppies is illegal in Myanmar, but farmers in this remote and desperately poor region say they have few viable options.

Until the 1980s, Myanmar was the world’s largest supplier of heroin. Afghan production surged around the turn of the century, and supplies from the Golden Triangle plummeted when China pressured Myanmar ethnic groups along its border to stop growing poppy. Instead of disappearing, opium production migrated south, away from the Chinese border, into areas of Myanmar controlled by a patchwork of ethnic groups, some of them allied with the government, some of them hostile. Although the government controls the big towns, upland areas are the fiefs of militias and ethnic armies, and the new center of the opium-growing business.

Myanmar’s return to drug trafficking, which also includes a thriving trade in methamphetamine, comes as the country opens up to the world and sheds the shackles of five decades of isolation and dictatorship. With the government preoccupied with the challenges of a budding democracy, opium money is lining the pockets of officials charged with cracking down on the illegal trade.