Not Just in Transit!

IDHDP welcomes this report but at the same time some of us are frustrated - as the situation was so predictable many years ago.  The evidence from some Caribbean islands was so clear as to what happens in countries used to transit large quantities of cocaine. 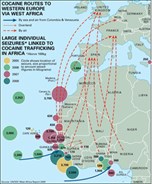 The report, Not Just in Transit: Drugs, the State and Society in West Africa, particularly highlights the importance of addressing drug use in as a public health issue rather than criminalizing people who use drugs.

Not Just in Transit: Drugs, the State and Society in West Africa states that the criminalization of  drug use and possession has a range of negative consequences, such as over-burdening already stretched justice systems, exacerbating social problems, increasing human rights violations and encouraging corruption. It also worsens major epidemics such as HIV and Hepatitis C, as people who use drugs often fear accessing the health and harm reduction services they need in case of legal reprisals. This is especially important for people who inject drugs who can be highly vulnerable to HIV through the use of non-sterile equipment.

The report cites data to highlight the extent of the problem in a region where drug consumption is said to be increasing. For example, in Senegal an estimated 9.1% of people who inject drugs are living with HIV, compared to less that 1% of the general population.

As well as treating drug use as a public health issue with socio-economic causes and consequences, the report also advocates for the reform of relevant laws; decriminalization of drug use and low-level, non-violent drug offences; adopting harm reduction approaches and encouraging research, including the gathering of baseline data on trafficking and consumption.

Quotes
"In this report, the West Africa Commission on Drugs describes the challenges that our region must confront – political, social and economic – and the policies it must adopt to prevent drug trafficking, production and consumption from undermining states and societies, and destroying lives."
Kofi Annan, WACD Convenor and Olusegun Obasanjo, WACD Chairman in joint foreword to Not Just in Transit: Drugs, the State and Society in West Africa