Punjab's drug menace: 'I wanted my son to die'

The northern Indian state of Punjab has witnessed a sharp increase in the number of drug-related deaths this year. BBC Punjabi's Arvind Chhabra investigates why the drug menace has become worse in the state.

"He was my only son, but I had started wishing that he would die… And now, I cry the whole night with his photograph in my hand," says 55-year-old Lakshmi Devi.

Her son, Ricky Lahoria, recently died of a drug overdose. He was 25.

His was one of 60 deaths linked to drug abuse in Punjab between January and June 2018, according to official estimates. In comparison, 30 people died in drug-related incidents in all of 2017. 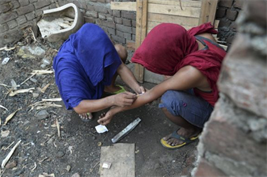 Police officials say that the number is likely to increase when they release data for the second half of 2018.

Drugs have been a scourge in Punjab for years now - once a transit point on the drug route, the state has now become a major consumer base.

Punjab's health minister Brahm Mohindra told the BBC his government had reduced the inflow of drugs into the state. But he could not explain why drugs had claimed more lives in 2018 than in previous years.