At least 3 percent of women were drug addicted in 2009, a number the U.N. considered to be low, because addiction can be easily concealed and underreported. By 2015, it had risen to 9.5 percent. Addiction among children wasn't properly counted until 2015, when the U.N. reported that 9.2 percent of children up to 14 years old tested positive for one or more type of drugs and were likely to be active drug users. 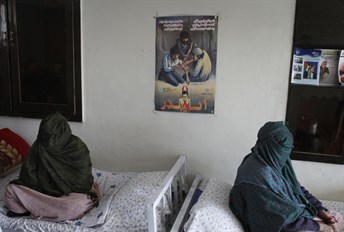 Four years on, "the number of women addicted is definitely increasing. It's on the rise compared to even two or three years back," said Anubha Sood, a senior program officer for the United Nations Office on Drugs and Crime in the Afghanistan country office.

"Imagine how difficult it would be for a family to cope with that, economically, socially, psychologically, and then multiply it at a country level," said Sood. "It will pull down, today or tomorrow, the entire economy."

"Many children become dependent on drugs, mainly opiates, at an alarmingly young age while in the care of drug-dependent parents or family members," the U.N. reported.

The growing rates of addiction reflect the increased availability of drugs. Afghanistan is the world's largest opium producer, despite the U.S. spending roughly $8.62 billion on counternarcotics efforts there.