In Cambodia’s prisons, pregnant women and young children are inmates

Since January 2017, there has been an alarming rise in the number of pregnant women and infants incarcerated. Widespread corruption means these impoverished female inmates have little to offer in exchange for their freedom

Last August, 35-year-old Sophea sat on the edge of a wooden bed frame that occupied most of the single-room home she and her husband, Piseth, shared with their five children, who ranged in age from an infant son to an adult daughter.

The smell of burning plastic from a nearby dump wafted into the tiny, tin-roofed house in a slum on the outskirts of the Cambodian capital, Phnom Penh. Since Piseth lost a leg after stepping on a landmine while serving in the Cambodian army, the money from his street begging and Sophea’s ragpicking – about 10,000 riels (US$2.40) a day – had not been enough to make ends meet. Sophea was pregnant with her sixth child.

A railway line separates the slum from a high-security gated complex. The pair often crossed the tracks to scavenge among the refuse of their wealthy neighbours. So when a woman who had arrived in the slum several months earlier, and who always seemed to be a little bit better off than everyone else, showed up with a proposal, a desperate Sophea was willing to listen.

“The woman said she came together with a few others and did pickpocketing in markets,” Sophea says, looking down at the concrete floor of her house while nursing her youngest child. “I joined her to steal people’s wallets, but soon the police caught us and I was in jail, charged with petty theft.”

As early as 2013, the number of women locked up in Cambodia’s 28 prisons for petty crime was being described as “alarming” by human rights groups. By January 2017, when Prime Minister Hun Sen introduced new laws in his “war on drugs” to tighten control ahead of the July 2018 elections, the number of women serving time, the over­whelming majority of them poverty-stricken, had soared. 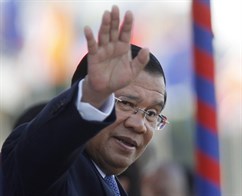 But the biggest problem is that it is not just a matter of serving your time, often there is no sentence to be served out – women are locked up until they can afford to pay a bribe for their release. And with the rising trend of women locked up on dubious drug charges, Naly Pilorge says “most women serving sentences are too poor to not be in prison”.