Russia's drug users have a right to needles, methadone and dignity

Before Russia wrested control of the Crimean peninsula in March this year, HIV transmission rates were falling in this region, thanks to life-saving schemes offered to drug users including needle syringe programmes and opioid substitution therapies (OST), such as the provision of methadone.

Before Russia wrested control of the Crimean peninsula in March this year, HIV transmission rates were falling in this region, thanks to life-saving schemes offered to drug users including needle syringe programmes and opioid substitution therapies (OST), such as the provision of methadone. But since coming under Russia's draconian drug laws, these schemes have been closed down, leading to at least 20 deaths already. Russia's dangerous stance toward drug users is causing untold harm in the fight against AIDS on the streets of our own cities and towns today. A shadowy world of drug-taking and rampant HIV infection pervades some of the most vulnerable groups in our society, who are stigmatised and marginalised by a state that refuses to take responsibility for their plight.

The facts speak for themselves: nearly 5 million people use illegal drugs in Russia, 1.7 million of whom are opiate users. Almost 60% of officially registered HIV cases in 2013 were also people who use drugs. In some cities, HIV prevalence among people who inject drugs is as high as 74%.The epidemic is on the rise, with 800,000 people officially registered as HIV positive and many others who do not even know their status. 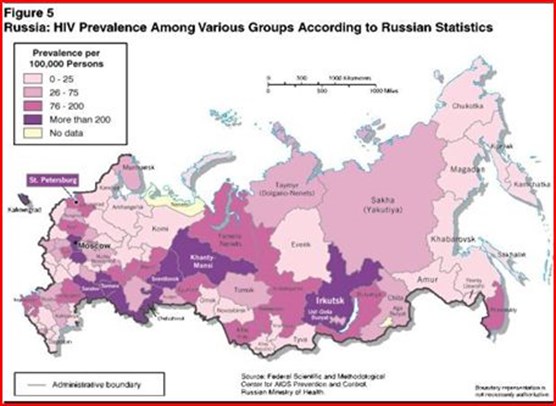 Tuberculosis has reached epidemic proportions in Russia, now the primary cause of death among people with HIV, and 78% of men with both TB and HIV are injecting drug users. The total number of people with HCV who also inject drugs is estimated to be over one million.

Despite this shocking scenario, the state provides no services to stem drug dependency and its related health and social problems. People who use drugs are depicted by state officials as 'deviant' and as criminals, and therefore undeserving of equal access to healthcare. The Russian government refuses to adopt even the most mainstream and well-studied approaches to drug treatment, including OST, which is actually illegal. Instead, antipsychotic drugs that were used against Soviet dissidents are part of the standard regime for treating drug dependency in state facilities, a practise contravening international standards.

In the 1990s, health problems related to drug use quickly emerged as major social and health challenges. Non-governmental organisations (NGOs) stepped in to respond to the crisis, providing clean needles and other support to drug users. NGOs and donors expected the Government to take over and expand these services. But soon after Putin's re-election in 2012, the situation worsened dramatically. Many NGOs become the target of new anti-NGO laws and a climate of fear spread, with mounting stigmatisation against people who did not fit the norm.

In today's Russia, it is still very difficult for NGOs that argue for health policies backed by scientific evidence and human rights to advance their agendas openly. With increasing levels of repression, few organisations are challenging the state. In the area of drug policy and treatment and AIDS, the Andrey Rylkov Foundation for Health and Social Justice (ARF) has been one of the few to take up this challenge.

Our approach has been radically different to others, having realised that the Government was ideologically opposed to drug users and was unlikely to shift its entrenched stance towards them. In 2009, we started out as a small but flexible platform, fundraising for and supporting community initiatives and activists, but with no physical infrastructure and therefore low overheads. This allowed us to build dynamic, horizontal projects that were conceptualised, led and managed by community activists, giving us flexibility to respond. Our strategies were designed to minimise risks stemming from any crackdowns by the increasingly heavy-handed authorities.

Our approach has evolved and been hugely successful, but we still operate without an office or other facilities. We now have an effective communication infrastructure based on hourly updates via Google listserv enabling us to coordinate and manage cases with other service providers helping people who use drugs in and around Moscow. Last year, we provided health services to some 1600 individuals and, according to drug users' feedback on overdose prevention that we started to record just recently, each day we save one person's life from a fatal overdose by giving out Naloxone and overdose prevention counselling to people.

A major factor in our success is the use of human rights law to fight Russia's authorities. We track cases where rights have been violated, do strategic litigation, and take bold campaigns to the public. In 2013 we initiated a street lawyers project using paralegals to provide legal education and basic legal aid to people who are victimised by law enforcement officials or discriminated against by medical facilities. These cases almost always fail in the Russian courts so we take them further. We have taken more than a dozen cases to national and international courts. One of these is Irina Teplinskaya, a drug user who filed a complaint to the UN Special Rapporteur on her right to health in 2011, and in 2012 filed a case in the Russian courts on her inability to access OST. Her case, together with two similar cases, is now under review with the European Court of Human Rights.

Above all, our approach of direct, confrontational activism gives a powerful voice to people who take drugs and are living with HIV. More broadly, ours is a fight for the rights and dignity of all people in a context where the state has abrogated its responsibilities to its citizens.

Anya Sarang is President of the Andrey Rylkov Foundation for Health and Social Justice in Moscow. This article is adapted from a chapter from contained within AIDS Today: Tell no lies and claim no easy victories, the first edition of a new biennial publication that presents the state of the civil society response to AIDS, published by the International HIV/AIDS Alliance. This chapter contains the links to the references for the statistics quoted above.