Rise in drug related deaths is cause for deep concern

New data, from the Office for National Statistics, shows that the rate of deaths caused by drug misuse in England and Wales are now at the highest since comparable records began in 1993.

Last year 2,248 drug misuse related deaths were recorded, with a further 613 in Scotland and 115 in Northern Ireland. The ONS report that:

All these deaths were avoidable and each of them represents a tragedy for an individual, their family and those who love them. Taken together, they underline the importance of providing effective and timely support to people experiencing substance misuse problems. 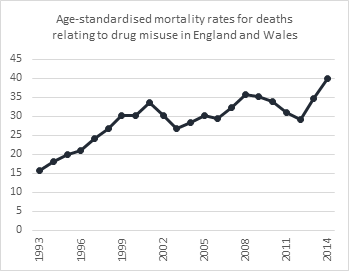 Research shows that drug treatment is a protective factor against drug related deaths, and that the system as a whole reduces opiate deaths by an estimated 880 deaths a year.

However, we know that many services struggle to provide effective support to people with multiple needs – those experiencing mental health problems, who are homeless and in contact with the Criminal Justice System. The last annual survey of the most high risk drug users suggests that 3 in 10 are not currently in structured treatment.