Best practices: How other countries dealt with drug problems

Portugal and Switzerland are two countries with a high rate of illegal drugs use in the 1980s and the 1990s. How did they manage to turn things around?

MANILA, Philippines – There is no stopping the administration of President Rodrigo Duterte from waging a war against illegal drugs in the Philippines.

As of September 4, data from the Philippine National Police (PNP) show that 4,798 drug personalities have been arrested while 685,740 individuals have surrendered.

All these bring the number of all drug-related deaths to at least 2,528 within the first two months of the new administration.

The drug problem in the country is however not unique to the Philippines.

Many countries have also faced drug problems – and their consequences – through the years. The difference, however, lies in the culture and root cause of the problem in each nation. 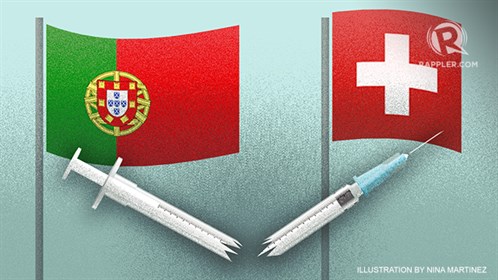 How did other countries deal with illegal drugs? Here's what we found.

Portugal faced a drug problem – mainly cannabis, cocaine, and heroin – that peaked in the 1990s. According to the Transform Drug Policy Foundation (TDPF), drug-related deaths in Portugal severely worsened as HIV, AIDS, and Hepatitis B and C rates among individuals who injected drugs increased.

As response to the worsening health of Portugal’s drug-using population, legislators enacted “one of the most extensive drug law reforms in the world” in 2001. Portugal decriminalized low-level possession and use of drugs.

While the manufacturing, dealing, and trafficking of illegal drugs is still penalized under Portugal’s criminal justice system, those found to be in possession of drugs for personal use are not given criminal penalties.

Instead, a person faces the local panel under Commissions for the Dissuasion of Drug Addiction composed of professionals in the field of law, health, and social work. The members of the panel determine the sanction to be given.

Sanctions on drug offense range from fines to community service. If found to be suffering from drug addiction, an individual is asked to undergo rehabilitation in a drug rehabilitation facility.

Portugal did not stop with decriminalization. It also increased funding to help expand and improve government programs focused on prevention, treatment, harm reduction, and social reintegration.

More >
Events Area
CONSTELLATIONS: An Online Festival on Drugs and Harm Reduction
Returning for its second yearfor our community to gather and connect, to explore innovative solutions, to have urgent conversations and to redefine what harm reduction is and what it can be.
The Lisbon Addictions Conference
Lisbon Addictions Conference will be stimulating and promoting high-quality scientific debate, showcasing leading European addiction research in the specialist areas of illicit drugs, alcohol, tobacco, gambling, and other addictive behaviors.
Harm Reduction International 2021 - postponed to 2023
The conference - now held biennially - is the main global forum for the exchange of information at the intersection of human rights, public health and drug policy. It attracts over 1,000 international delegates, including service providers, policy makers, UN officials, researchers, advocates and networks of people who use drugs, among others.