30th anniversary of landmark ruling marked by push for human-rights based approach on the matter.

Launching a new push to coincide with the 30-year anniversary of the Supreme Court’s landmark “Bazterrica” ruling, more than 500 respected legal voices will today call on the government to redraw its policy on narcotics and end the so-called “War on Drugs.”

In total, more than 550 Argentine magistrates, judges and lawyers will call for wholesale reforms based on human rights.

They are seeking a fresh approach, which includes decriminalization, the end of forced anti-drug treatment to users and the creation of policies focused on risk reduction.

The Supreme Court’s watershed declaration, some three decades ago today, said the prosecution of individuals for possessing narcotics for personal consumption was unconstitutional. 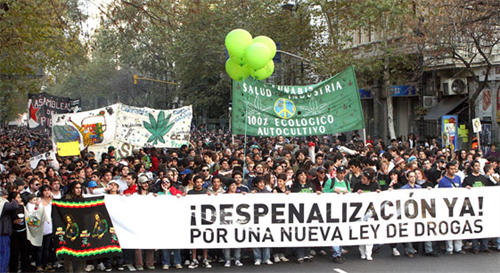 The “Bazterrica” ruling, named after a 1981 raid on the home of musician Gustavo Bazterrica, — a former guitarist in rock bands Los Abuelos de la Nada and La Máquina de Hacer Pájaros — was the first of several key rulings on the matter. In subsequent years, other rulings went back and forth re-instating the possibility of criminalizing use first only to then limit it again.

The latest key decision on the matter, the “Arriola” ruling, says penalizing an adult for the personal consumption of marijuana is unconstitutional, but stops short of considering consumption or possession fully legal.

Introducing a declaration endorsed by 250 magistrates and 300 other signers at the National Congress’ Blue Room, an Argentine civil society organization dealing with criminal law (Asociación Pensamiento Penal, or APP) is due to file a petition asking for a modification to the national drugs law 23,737, which still allows for the criminalization of possession for personal consumption.