A doctor tries to lower barriers to methadone treatment

Dr Austin O’Carroll holds regular clinics in a meet-people-where-they-are spirit – trying to erode some of the barriers that prevent Dublin’s homeless from accessing the methadone treatment they need.

For John, a heroin user for seven years, there were a few snags that, for a while, held him back from getting stable on methadone treatment.

Staff in two methadone clinics wanted him to give urine samples in front of them – a level of intrusion that he, like others he knows, found uncomfortable and off-putting.

“I couldn’t get stable on methadone because of the way the clinics are, the structure of having to urinate in front of people,” he says. “Somebody comes in with you and there are mirrors around the toilets.”

The metal detectors and security guards lend a hostile feel to the National Drug Treatment Centre, said John, who withheld his surname. “Trinity Court is like walking through a gaol.”

That’s how he ended up using the Safetynet service, which he dropped into on a recent Wednesday morning at the Salvation Army homeless hostel on Granby Row. 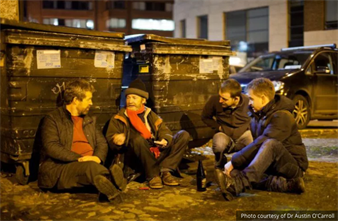 There and in other similar places in the city, Dr Austin O’Carroll holds regular clinics in a meet-people-where-they-are spirit – trying to erode some of the barriers that prevent Dublin’s homeless from accessing the methadone treatment they need.

“The main skill I have, is you learn to interact with people,” says Dr O’Carroll, stressing the importance of being upfront and honest and respectful.

More >
Events Area
CONSTELLATIONS: An Online Festival on Drugs and Harm Reduction
Returning for its second yearfor our community to gather and connect, to explore innovative solutions, to have urgent conversations and to redefine what harm reduction is and what it can be.
The Lisbon Addictions Conference
Lisbon Addictions Conference will be stimulating and promoting high-quality scientific debate, showcasing leading European addiction research in the specialist areas of illicit drugs, alcohol, tobacco, gambling, and other addictive behaviors.
Harm Reduction International 2021 - postponed to 2023
The conference - now held biennially - is the main global forum for the exchange of information at the intersection of human rights, public health and drug policy. It attracts over 1,000 international delegates, including service providers, policy makers, UN officials, researchers, advocates and networks of people who use drugs, among others.