America’s opioid catastrophe has lessons for us all, about greed and racial division

We’ll build a wall to keep the damn drugs out.” So insisted Donald Trump at a rally last year to launch the White House’s initiative to stop opioid abuse. For Trump, at the heart of America’s opioid crisis lie open borders, illegal immigrants and foreign drug cartels.

Brad Beckworth, an Oklahoma state attorney, takes a different view. The drugs to which so many in the state are addicted, he told a court in July, “didn’t get here from drug cartels. They got here from one cartel: the pharmaceutical industry cartel.”

The court agreed. Last week, it ordered the pharmaceutical giant Johnson & Johnson to pay $572m in compensation for running a “false and dangerous” sales campaign that had created an unprecedented epidemic of addiction in Oklahoma. 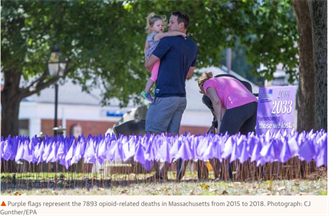 America’s opioid crisis is stark. Both the use and abuse of prescription opioids – painkillers such as OxyContin and Vicodin – have, since the 1990s, rocketed. Last year, 211m opioid prescriptions were handed out in the US. At its peak in 2012, that figure stood at 255m – 82 prescriptions for every 100 residents. In 2016, a fifth of all deaths among Americans aged 24 to 35 were due to opioids. Opioid-caused deaths have been a major factor in life expectancy falling for three years in a row.