The international criminal court has authorised a full investigation into the Philippine president’s “war on drugs”, a breakthrough for campaigners who say the decision brings families one step closer to justice.

The ICC said in a statement that, based on the information provided to judges, the so-called war on drugs appeared to be a “widespread and systematic attack against the civilian population”, which took place “pursuant to or in furtherance of a state policy”. Judges had approved a request to begin the investigation into the crime against humanity of murder, it said. 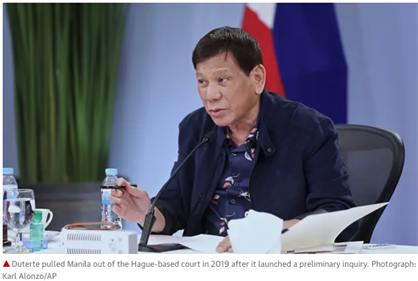 Duterte rose to power promising a merciless crackdown that would rid the country of drugs. On the campaign trail he once said that there would be so many bodies dumped in Manila Bay that fish would grow fat from feeding on them. Since his election in 2016, between 12,000 and 30,000 civilians are estimated to have been killed in connection with anti-drugs operations, according to data cited by the ICC.

Duterte has said he will not comply with the ICC’s investigation, and withdrew the Philippines’ membership in March 2018. In its statement, the ICC says the withdrawal took effect in March 2019, and that it retains jurisdiction for crimes committed until this point.

Kristina Conti from the National Union of People’s Lawyers, who represents some of the families of victims, said she was overjoyed by the news. In some cases, she said, relatives did not know the perpetrator who killed their loved ones, but they wanted broader accountability from the country’s leadership. This included, she said, “the person who they have publicly seen, heard to have ordered the killings, instigated the killings and most importantly promised to absolve everyone who was involved”.

It was possible the case could take years, she added.

Judy Pasimio, a spokesperson for the advocacy group In Defense of Human Rights and Dignity Movement (iDefend), said the official death toll was likely to be an underestimate, because so many relatives were afraid to speak out.