Sources in Afghanistan have told IranWire that so far, the Taliban has failed to implement any restrictions on drug trafficking out of the country and the drug trade is now operating more freely than ever before. Farmers in the border regions are laying the groundwork to grow many times more poppies than before when the planting season gets under way next month.

In response Molavi Shirahmad Ammar, the Taliban's deputy governor in Herat, told IranWire that a document banning the transit and trafficking of narcotics would be issued in the coming days.

Drug trafficking has been a lucrative business in Afghanistan for decades as the world’s main opium-producing country. Refugees in Iran are often arrested and even hanged for having a role in the trade, although they are a million miles from being the main players. 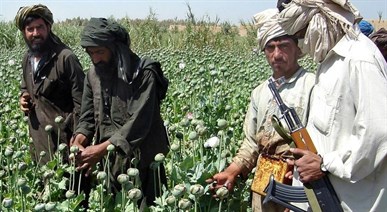 Decades of instability in Afghanistan have made room for the drug trade to thrive, often with the complicity of law enforcement officials on the ground. IranWire recently spoke to Ahmad Farshad Saleh, the former head of news for the country’s 24-hour outlet Ariana, who was named the country’s Reporter of the Year in 2016 for an investigation into the drug trade in Kabul apparently taking place in full view of authorities.

Like thousands of his colleagues, Saleh fled the country after the Taliban takeover last month. With the sudden gulf in journalistic scrutiny, the country in disarray and the new government still establishing itself, the drug market is understood to be experiencing a new lease of life.

Herat governor Seyed Vahid Qatali previously told IranWire that part of the Taliban's war budget came from drug trafficking. At the time, he accused the Taliban of directly and knowingly facilitating the trade. During the Taliban’s previous period in power in the late 1990s, the cultivation and transit of narcotics was free and unfettered by legal restrictions as a core part of the Taliban’s various income streams.

This week IranWire spoke to a drug dealer named Mohammad, also in Herat. He was jubilant about the recent regime change: “Before the Taliban took control, we had to pay huge bribes to government officials to allow for drug smuggling. It was good that the Taliban took power. Now we can transport as much as we want to Iran more easily. The reason for the increase in opium prices, of course, is that the Taliban are not an obstacle to this matter."

Since the former government in Kabul fell, the price of opium has increased across the board in Afghanistan. A kilogram of opium now sells in the markets of the southern and western provinces for US$100, double the cost of just a few months ago.

A video of a recent criminal trial in the southern Afghan city of Baba Haji, Helmand Province, has been leaked to IranWire, showed a Taliban-aligned judge handling a case of fraud in the opium trade. Three farmers were being prosecuted for having been selling halva instead of herion to drug dealers. Rather than going after the dealers, the judge ordered the farmers to return the payments they had received to the drug gang.