The problem with crack is poverty

"Crack cocaine is not the problem, the problem resides in the personal and social conditions of users”, Carl Hart

“Brazil doesn’t offer alternatives for people to stop using crack cocaine”, said Carl Hart, professor at Columbia University and a prominent specialist on drug use in the United States. He came to a meeting with Viva Rio’s researchers and health professionals, last Wednesday, at the headquarters of the institution. 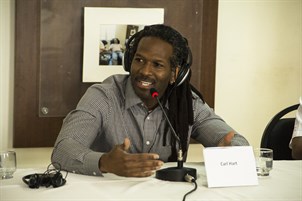 Hart is the first tenured African American neuroscientist at Columbia University. In his studies on crack cocaine dependency, he concluded that 80% to 90% of drug users don’t suffer from dependency. As part of his research, he offered US$5 to “guinea pigs” that decided not to use a second hit of crack cocaine in a day. Hart found that when they took a relatively stronger first hit, they tended to take a second one, but with smaller doses they were more likely to choose the alternative prize.

“They don’t fit the stereotypes of drug addicts that are not capable to resist the next dose. When they are offered alternatives, they make rational and economical decisions. Then, I perceived that crack cocaine is not the problem, the problem resides in the personal and social conditions of users”, Dr. Hart said.